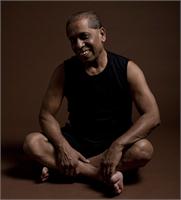 Ashtanga yoga master Manju Jois, of Mysore, South India, is the oldest son of Sri K. Pattabhi Jois. Born on November 16th, 1944, his introduction to yoga began at the age of seven, when he was awakened early each day by his father for lessons that would forever change the course of his life and the lives of those who would study with him in the years to come. By age 15 he started teaching alongside his father and has continued ever since. His 50 years of teaching the true Mysore Ashtanga method has taken him to 22 countries and 21 states in the US and has resulted in rich educational offerings for students worldwide, including Ashtanga weekend workshops, teacher trainings and intensive week-long classes, all of which focus on the ancient traditions passed down through his father.