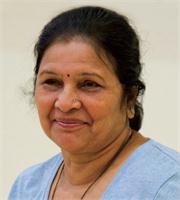 Saraswathi, daughter of Sri K Pattabhi Jois (Guruji) and mother of Sharath Jois, Saraswathi was born in 1941. She practiced yoga steadily under the guidance of her father from the age of 10 in 1951, until taking on family responsibilities in 1963. She was the first female ever to be granted admission to the Sanskrit College in Mysore where she studied both yoga and Sanskrit from Guruji. For many years after this she assisted him in yoga classes but in 1975 started teaching her own classes at a local temple, for eleven years teaching only women. In 1986 she began a quiet revolution in the local Mysore community, teaching both men and women together in a mixed class. Although criticized for making such a radical change to local tradition, she persevered and gained great respect with the local community. In 2002, Saraswathi once again started teaching with Guruji (and Sharath) at the KPJAYI in Mysore.

Known for being especially attentive to new students, Saraswathi is a powerful female influence within the Jois family, bringing wisdom, experience and a feminine perspective to her teaching. Since Guruji’s passing in 2009 Saraswathi has dedicated herself to the continuation of his life’s work, sought after as an Ashtanga Yoga teacher throughout the world. We are incredibly fortunate to have her teaching in KPJ Bondi so please take this opportunity and join us to experience the powerful teaching of Saraswathi.

“Through the various stages of life, yoga practice naturally changes it’s form and becomes much more than just asanas. Being a woman. mother and householder with important responsibilities, our energy is redirected at times and our yoga practice gives us the courage to embrace change. The constant which always remains, is the clarity and balance that the ashtanga yoga practice gives. The years of practice become a framework for how we live our lives each and every day.”