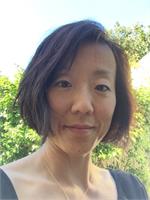 Julie’s love of movement began with dance lessons at age 4, and her first encounter with yoga was in 1992 as a student of art history at Columbia University in New York City. After completing an MSc at The London School of Economics and Political Science, she moved to Hong Kong to put her degrees to use. Instead, she discovered Ashtanga Yoga in 2001 with Michel Besnard, and life took a different turn. In 2007, Julie began making trips to Mysore and is very blessed to have studied at the feet of Sri K. Pattabhi Jois, R. Sharath Jois and R. Saraswathi Jois before returning home and having two babies. These babies – who are now 8 and 5 years old – are both the backbone and fruits of her Ashtanga Yoga practice. Julie has received teaching Authorization from KPJAYI and is honored to have shared this beautiful and transformative practice with students in Hong Kong, India, Denmark, Germany and the U.S.