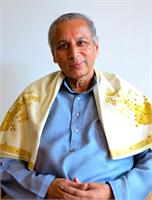 Vidvan Prof H.V. Nagaraja Rao holds an M.A. from the University of Washington, and also from the University of Mysore, Alankara Vidvat and Vyakarana Vidvat in Sanskrit from the Maharaja’s Sanskrit College in Mysore. He has received the highest recognition for his work in Sanskrit poetry from the President of India. He was also a visiting professor of Sanskrit at the University of Chicago in 1995, 1996 and 2001, a Fellow at the Center for Advanced Studies at the Hebrew University, Jerusalem and the Honorary editor for Sudharma Sanskrit Daily, the only publication of its kind worldwide. Professor Rao has an uncanny ability to bring new light to texts such as the Gita and the Upanishads with his infectious passion and his ability to communicate in English, which is rare among sanskrit scholars of his stature. Students leave his presentations with a feeling of liberation from the mundane and inspiration to strive for higher goals in life.
“I have seen the greatest pundit’s speaking on high philosophical subjects from the Gita to the Vedas and Nagaraj Rao is among the greatest of them in his understanding and ability to communicate the underlying philosophies of these texts.” – Sri Kantha Shastri of the Veda Gita Foundation, San Diego.